9/11 memorial to be built at Toledo base

SWANTON  - The 180th Fighter Wing of the Ohio Air National Guard will construct a sundial memorial dedicated to those lost during the tragic events of Sept. 11, 2001.

Members of the 180th have collected various artifacts for the memorial, including a steel beam from the World Trade Center, limestone from the Pentagon and soil from the Pennsylvania field where Flight 93 went down. The memorial also will include glass pieces symbolizing the fallen -2,977 in all.

Toledo Regional Architects, Contractors and Engineers and other Toledo community partners are working together to engineer and construct the permanent memorial, which will be located at the center of the 180th, by Sept. 11, 2016, the 15th anniversary of the attacks on U.S. soil.

Though the memorial will be on the base, viewing for the public will be arranged.

TRACE, an industry advocacy group, is providing engineering, preconstruction and construction services to bring the 9/11 memorial concept to fruition.

Donations to help cover the cost of materials for the memorial can be made payable to the Toledo Community Foundation with a note in the memo line directing it to the Toledo 9/11 Memorial Fund. Contact TCF at 300 Madison Ave #1300, Toledo, OH 43604 or 419-241-5049. Donations also can be made online at toledocf.org 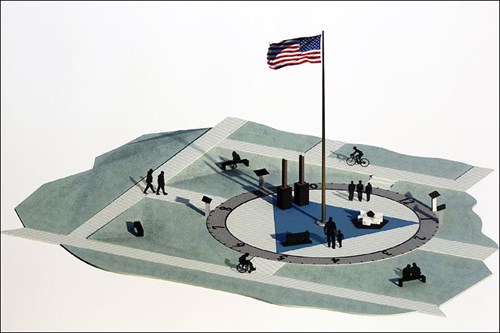